My favorite novel is Joseph Conrad’s Heart of Darkness, a story that investigates the questions of what lives inside the heart of man, and what relationship civilization has to dark regions of the Earth.  Do we really understand the heart of darkness, and can we say that when we “live in the light” that we are without darkness ourselves?  There is plenty of darkness in the world, physically, emotionally and probably metaphysically as well.  Humanity’s answer to this darkness has often been to build and shine the light of civilization as a protest and challenge to the natural state of the world; part of being civilized is to bring light of all kinds to illuminate dark places.  Joseph Conrad’s Marlow reflects on living “in the flicker” while floating on the Thames. Today, he might have done so on the Yangtze.

The New York Times’ China Realtime Report today posted a short piece on the Internet responses to Neil Bush’s photo and humorous comment on Weibo.  The article included a few of the interesting ones.  Most are funny; however, one in particular makes me reflect on the truth of pain in China: 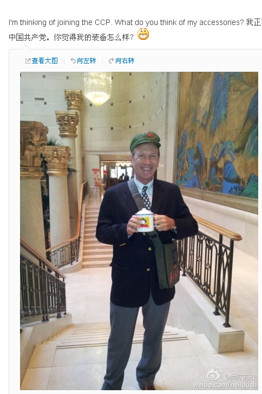 There are many forms of humor.  Most rely on the tension that exists between things as they are and things as we would like them to be.  The behavior of the Communist Party of China (CCP) is certainly not what anyone desires.  Joking about the CCP is often a defense mechanism against the very real pain that many feel in association with CCP rule.  We construct tales about corrupt, self-serving, and immoral behavior from the real activities of tens of thousands of officials.  Not all officials of the CCP act in such a way; I have met many wonderful and upstanding CCP officials who seem to be working hard to turn their party and country in a new direction.  But in historical and in contemporary terms, the amazing accomplishments of the CCP have always had to be balanced against the behavior of the CCP, the latter usually leaving much to be desired.  What can one do about it?  Usually we can’t do much, and so we crack jokes.  Thank goodness Neal Bush made a good one with his accessories!

But a good joke doesn’t change the fact that for many in modern China, their memories and contemporary realities of life exist in a world of darkness.  And we do not understand that darkness because it is not ours.  Though not understanding it, “day” still knows of “night’s” darkness; we can see from the vantage point of our liberty that places without liberty exist, and we respond to this knowledge in various ways.  A good joke is a great way to respond, but can demonstrate – as the writer poignantly reminds us – that we forget some things are so painful that by making lighthearted fun of them we illuminate our own forgetfulness